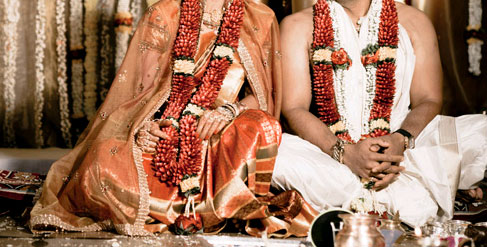 Thirumana Porutham, also simply known as Porutham, is a very important part of marriage process. Anything done right from the very beginning will lead to definite success; and if it’s marriage we are talking about, then Porutham is the first thing to start with. Read further to know more about Porutham...

The main concept followed in the Porutham process is the usage of the Dasha Koot. Dasha Koot mean 10 points or 10 Porutham. If the 10 Porutham of the girl and the boy have a good match, it is considered a match made in heaven. Now let’s understand these 10 Porutham in detail.

Rasi means zodiac signs in Tamil Astrology. In Thirumana Porutham, Rasi Porutham involves testing the compatibility between the zodiac signs of the two individuals. A blissful and happy life is promised to those whose Rasi are found to be compatible. The Rasi or zodiac sign of a person is determined by the position of the Moon at the time of birth, which in turn determines their character and physical characteristics. A lot can be understood about a person just by knowing their zodiac sign; whether he/she has a soft character or a bold character, all can be judged with the help of the Rasi. As such, it is important for the Rasi of the individuals who are planning for a wedlock to share a cordial bond with each other. Rasi Porutham comes as a useful remedy when other much complicated Porutham do not match.

Normally, a match is considered to be most appropriate if the Rasi of the girl or the boy is in 7th position. But, there is a lot more complexity and depth in Rasi Porutham to justify the match or mismatch between the two individuals. Like, if the Rasi of both the boy and girl fall in the 6th or 8th position of each other, it is called Sashtashtaga Dosham (inauspicious).

The compatibility between the ruling lords of the boy and the girl is determined by the Rasyadhipathi or Rasi Athipathi Porutham. This Porutham ensures a healthy understanding between the two families (in-laws). So, if the lords of both the individuals share a friendly relationship, it is considered a good match to proceed with. If they share a neutral relationship, even then marriage is considered; but if they share a rivalry, it is a strict no. For instance, Aries and Scorpio are two Rashi for which Mangal (Mars) is the Athipathi. But, as Mercury is rival to Mars and Mars is rival to Saturn; Aries and Scorpio will not match with Gemini, Virgo, Capricorn and Aquarius. Rasyadhipathi Porutham is also the one considered for Santhanam, meaning offsprings.

Vasya Porutham is considered to ensure good compatibility between the boy and the girl. This Porutham will ensure mutual attraction between the two and also help the couple in enjoying pleasurable moments together. Vasya Porutham will have much more importance when Poruthams like Ganam and Rasi are giving trouble. For example, if the girl’s Rasi is Aries and boy’s Rasi is Scorpio or Leo, they will be compatible. Similarly, the zodiac signs that are compatible with each other are Gemini with Virgo and Libra with Capricorn, to name a few.

The 27 Nakshatras in astrology are divided into three sub-categories or Ganas, they are, Deva Ganam, Raakshasa Ganam, Manushya Ganam. Gana Porutham denotes the physical characteristics the boy and girl would share. If they both share the same Ganam, it is most appropriate and is called Eka Ganam. If the boy is of Deva ganam and the girl is of Manushya Ganam, then also it can be considered; but if both belong to Raakshasa Ganam, it is considered as a mismatch.

In Nakshatra Porutham, Yoni Porutham denotes the physical or sexual compatibility between the girl and the boy. There are certain Nakshatras (constellations) that are termed ‘not’ compatible with each other. Every Nakshatra is assigned to an animal and with this, we can determine their compatibility. For example, cat and rat are arch rivals, there will be no peace and understanding between the couple. Poosam (which is represented by a goat) is not compatible with Chithirai (which is represented by tiger). As such, if proper care is taken into finding the pair which is compatible with each other, they will enjoy a beautiful physical relationship with intimacy.

Dina Porutham ensures a long, prosperous and a healthy life, free from all the discomforts that life can pose to the couple. Once the stars of the boy and the girl show a good compatible percentage, the match can go ahead. This will ensure a promising future for the couple, free from illness and poverty. But, whatever the case may be, the last Nakshatra (constellation) (which is the 27th Nakshatra) has to be rejected from any calculations.

Rajji or Rajju Porutham is considered to be one of the most important Porutham points and there are no compromises while making these calculations. Rajju Porutham denotes the girl’s Maangalya Bhakyam and having a strong positive sign is utmost important. The 27 constellations are divided into 5 groups, with each group representing a human body segment. These groups are named as follows:

If the boy and girl belong to the same Rajju, then it is considered as an inappropriate match. This means Eka Rajju is not compatible. For instance, the Sirasu Rajju comprises following constellations: Chithirai, Avittam and Mrigaseersham. So, if the boy and the girl belong to any of these three constellations, their match is not considered and it will result in Rajju Dosham. Further, it is believed that if the girl is free from Rajju Dosham, the girl will have a strong Maangalya Bhakyam.

In Thirumana Porutham, Vettai Porutham represents the failure or hardships that the couple might face, if a proper match is not made. This could lead to divorce in future. There are certain constellations that are deemed to be repellent of the other. A match made between the two could lead to a disastrous marriage. Below mentioned is the list of constellations that have a repellent quality with the other.

If care is taken to observe the above details while preparing the matching process, the couple to be wed will have a future free from all the discomforts of life.