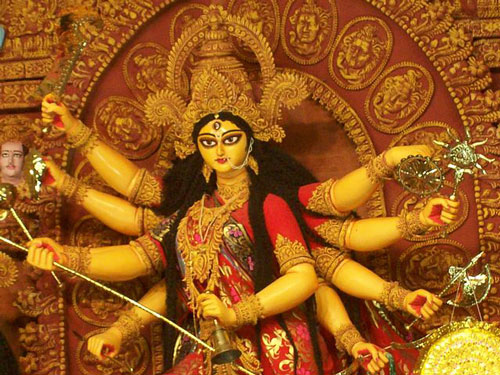 Durga Puja 2020 or Durgotsav 2020 is a celebration to revere and pay homage to Goddess Durga. Much like Dussehra, this festival too commemorates the victory of good over evil, as it is believed that on the day of Vijayadashami, Goddess Durga killed the wicked demon Mahishasura. Therefore, in her honour people around the country observe Durga Puja 2020, celebrating not only her victory but also the true power of a woman who can not only defend her loved ones, but also attack to save them.

This year, the Durga Puja 2020 celebrations will begin on Thursday, 22 October 2020 and end on Monday, 26 October 2020. As per the Hindu Panchang, the five-day celebration begins on the Shashti (sixth day) of the Sharad Navratri and continues till Dussehra, the tenth day. As the commemoration is popular in the Indian states of West Bengal, Assam, Bihar, Tripura, and Odisha, and the country of Bangladesh, these areas are bedecked with beautifully adorned Pandals of Goddess Durga. These Pandals feature gorgeous idols of Goddess Durga on her lion, killing Mahishasura, along with Lakshmi, Saraswati, Ganesha, and Kartikeya. Additionally, there are numerous performances by the local folks and other festivities, delicacies, etc. giving the place a carnival-like look.

Several other names for the Durga Puja 2020 celebration include:

Let us read on to learn more about Durga Puja 2020.

Durga Puja 2020 is one of the most awaited Hindu festivals. This day is a commemoration of Goddess Durga when she visits us for a period of five holy days. Durga Puja 2020 is the festival of joy and it turns into a carnival in West Bengal, and many other states of India. However, although the festivities are spread throughout the country, yet, West Bengal remains the hub for Durga Puja celebration.

Durga Puja 2020, also known as Durgotsav 2020, falls in the Autumn season. Mahalaya heralds the coming of Goddess Durga to earth, from her marital home Kailash. On the day of Mahalaya, Goddess Durga is invited to transcend on earth. The festival of Durga Puja 2020 starts from the next day, i.e., Shashti or the sixth day of the month of Ashwin and ends with the immersion of Durga idols or Visarjan on Vijayadashami or Dussehra, which is the tenth day of Navratri.

During the Durga Puja 2020 celebrations, Goddess Durga is worshiped along with Ganesha, Kartikeya, Lakshmi, and Saraswati. Lord Shiva, the consort of Goddess Shakti is also given a special place during Durga Puja. The period of worship is also known as Devi Paksha or the fortnight of the goddess. The time of celebration is also known as Akalbodhan, which means the untimely awakening of Goddess Durga. The main reason behind this name is that although the festivities for Durga Puja 2020 fall in the autumnal phase of the year, however, this is an unconventional time to begin worship of the Goddess. This is so, because the conventional time for Durga Puja, that used to be the norm originally as per the Shastras, is in the Chaitra month of Hindu Calendar , known as Basanti Durga Puja.

To understand Durga Puja in detail, let us read the legends associated with it.

The atrocious demon king Mahishasura, had grown into power and started killing innocent people. In order to stop Mahishasura’s killing spree, Lord Brahma, Lord Vishnu, and Lord Shiva created the divine lady - Goddess Durga. Durga was blessed with weapons from Devas or Lords and a Lion as her conveyance. She fought the demon Mahishasura for nine long days. It was the tenth day, when Goddess Durga was finally able to conquer and vanquish the demon. Mahishasura was killed by Durga on Vijayadashami and she freed mankind from his heinous acts. As a result of her defeating the demon, Goddess Durga came to be known as Mahishasura Mardini (the one who killed Mahishasura). Owing to such a triumph of good over evil, Durga Puja is celebrated every year with much zeal and fervour. This is one of the main legends of Durga Puja 2020, and is even portrayed in the idols in the Durga Puja 2020 pandals.

Durga Puja is also known as Akalbodhan, due to its association with the legend of Lord Rama. Before heading to the battle against Ravana, Lord Rama worshipped Goddess Durga to be bestowed with her blessings. According to traditions, the Puja required 108 Neelkamal or blue lotuses, and Lord Rama after looking everywhere in the world, could only collect one hundred and seven. Unfortunately, one lotus was still missing. Therefore, to compensate for the missing flower, Rama offered one of his eyes, that was said to resemble blue lotuses to Goddess Durga. A pleased Goddess came forth and blessed the King of Ayodhya. As a result, Lord Rama defeated Ravana on the day of Vijayadashami. Akalbodhan means the untimely period of worshipping Goddess Durga. The period of worship by Lord Rama is termed to be the unconventional time to invoke Goddess Durga. Hence, its name Akalbodhan is popular among a large fraction of regions.

To know more about the significance of the days of Durga Puja, let’s take a look at how Durga Puja is celebrated.

Preparations for Durga Puja 2020 begin months before the actual occurrence. Pandals or temporary stages are created for installation of the idols of deities. This is a great time for the artisans or idol crafters to showcase their creativity. Kumartuli in Kolkata is a famous place where artisans spend months to carve the ideal sculpture of Mahishasura Mardini for Durga Puja 2020.

Let us take a look at the tradition and understand its importance of getting dirt from an outcast’s place, like a brothel before beginning with the sculpting process.

Sex workers are given special regards during Durga Puja 2020. It is a long carried tradition in many places, that the soil from nishiddho pallis or forbidden territories. This describes the territories inhabited by the “social outcasts” like that of sex workers, i.e., brothels. The soil from the yard of their place is taken and added to the clay that will be used to carve the idol of Goddess Durga. It is considered as a holy process. The main reasons behind this tradition of Durga Puja 2020 are:

Durga Puja 2020 is going to commence from Shashti, but the festive mood captures the mind of the devotees from the day of Mahalaya. Let us take a look at each day of the Durga Puja 2020, and what it entails.

On the first day of Durga Puja 2020, Shashti, Mahishasura Mardini Goddess Durga is welcomed, as she comes down on earth for a period of five days. Daks or leather instruments mark her arrival with much fanfare of Durga Puja 2020. Kalparamba Puja is performed which is later followed by Bodhan and Adivas. On Shashti, idols of Goddess Durga are installed in the worshipping places, Pandals, with special Pujas and customs.

On the second day of Durga Puja 2020, Saptami, Goddess Durga is worshiped along with nine types of plants. The day begins with a holy bath for the Kolabou or banana plant, before the arrival of dawn. The nine types of plants, known as Nabapatrika that are worshiped on Saptami are symbolic of the nine forms of Goddess Durga. Therefore, Durga Puja 2020 is also observed as a festival by the peasants, wishing for a better harvest in the upcoming harvest season.

Pushpanjali is the main feature on the day of Ashtami, which is the third day of Durga Puja 2020. It is also known as Mahashtami. The day commences with the chanting of Sanskrit recitals followed by Pushpanjali. Ashtami is regarded as the most important day of the festival of Durga Puja 2020. In some regions, Kumari Puja is held where young, unmarried girls are worshiped as the Goddess Durga. The day ends with Sandhi Puja in the evening, followed by the evening Aarti.

Sandhi Puja declares the beginning of Navami, the fourth day of Durga Puja 2020. On Navami, Bhog (sacred food offering) is prepared for the Mahishasura Mardini Goddess Durga. This is later distributed among the devotees as Prasad. Dhunuchi dance is a prime feature that takes place on the day of Navami.

This is the day when the turn for bidding a farewell to Mahishasura Mardini Goddess Durga arrives. Sindoor Khela is one of the major parts of Vijayadashami, the fifth and final day of Durga Puja 2020. In this ritual, married women smear vermilion on each other’s face and play with it, thus the name Sindoor Khela, the game of vermilion. A grand farewell is given to Goddess Durga as she is on her way to return to her holy abode in Kailash.

On this day of Durga Puja 2020, the idols of Goddess Durga from the Pandals are immersed in the rivers or lakes. This event is known as Durga Visarjan. This marks the end of Durga Puja with crying ambience all around. Devotees cheer during Visarjan “Asche bochor abar hobe” which means that the celebration will happen again next year. The saying signifies that although the Goddess has to leave after the completion of Durga Puja 2020, however, her devotees are satisfied with her going because she will return to them again, next year.

Durga Puja 2020 is more than just five days of religious worship, where Goddess Durga or Mahishasura Mardini, is paid ritual regards. It is a frolic carnival in the state of West Bengal and many other states of India and other countries as well. During these five days, beautifully bedecked Pandals are created in numerous places throughout the country. Durga Puja 2020 is widely celebrated in parts of Delhi as well. In places outside Bengal, people from the Bengali community indulge themselves into a merrymaking get-together. Goddess Durga is also worshiped in parts of North India and western parts of India, but it’s West Bengal where the festival of Durga Puja 2020 is celebrated with much enthusiasm.

Talking about Pandals, theme-based Pandals have gained enormous popularity in the modern era in India. Here, the Pandals are crafted according to existing trends of society for Durga Puja 2020. Durga Puja becomes the ground for casual gatherings, where people gather around to enroll themselves in casual but interesting topics while savouring the food from stalls spread throughout the place and enjoying the performances. This is a common trend in the streets of Bengal. Durga Puja 2020 is all set to bring together the various sects of India once again. In Durga Puja 2020, people adorn themselves to welcome Goddess Durga on earth once again, after a mournful year of divine separation.