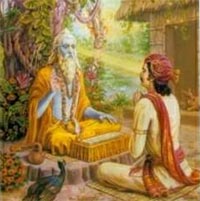 Guru Purnima in 2020 is celebrated across India with great enthusiasm and bliss. It is observed on a full moon night of Hindu month Ashadha. Guru Purnima in 2020 will be celebrated on Sunday, July 05. On this day, people worship their Guru by offering garlands, fruits, dakshina, etc. and wishing them a Happy Guru Purnima. This day is also known as Vyasa Purnima. Read on this exclusive article only on MyKundali, where we reveal the auspicious Guru Purnima Muhurat in 2020 and Mantras to recite to attain the blessings of your Guru. offer Guru Purnima wishes to your teachers and Gurus in life and make this day special for them.

Free Janam Kundli As Per Your Birth Details

What Is Guru Purnima?

Guru Purnima in 2020 is dedicated to the great teachers and mentors who build up our future. Guru or a teacher is someone who acts like a guide in our lives directing us towards the right path for our betterment. Therefore, it is a fine way of paying homage to them through the day of Guru Purnima.

According to Hindu Vedic scriptures, Guru Purnima commemorates the birth of Ved Vyas. Ved Vyas is referred as one of the greatest Gurus in Indian Philosophy. He symbolizes the Guru-Shishya (teacher-student) relationship. It is also believed that he completed the Brahma Sutras on the day of Guru Purnima.

All of you have had teachers. Some of them were great while some of them even greater. It's time to pay gratitude to them on Guru Purnima in 2020 by offering them Guru Purnima wishes and organizing something special as a token of gesture. Let’s take a look at some of the legends of Guru Purnima that would give you a better understanding of the Guru-Shishya tradition.

Since Guru Purnima is not only limited to Hindus, the festival has a number of legends associated with it. Let’s take a look at them:

Krishna Dwaipayana was born on this day. His service to Vedas has been commendable. He was later named Ved Vyasa because he edited and divided the Vedas into four parts - Rig Veda, Yajur Veda, Atharva Veda, and Sama Veda. It is believed that Ved Vyasa completed the four Vedas on the day of Guru Purnima. Ved Vyasa also wrote and compiled the epic Mahabharata. His contribution to the scholarly principles of the Hindu Vedas had earned him the stature of being a Guru or teacher.

Gautama Buddha was born as Siddhartha Gautama. He sacrificed all worldly pleasures in search of enlightenment. He delivered his first speech at Sarnath, a month later after attaining enlightenment at Bodhgaya.

On his way from Bodhgaya to Sarnath, Gautama Buddha was penniless and had to pass the Ganges river through air. His teaching capability was unquestionable, as he passed his enlightenment to his disciples without being biased of self-worthiness. When he met five companions at Sarnath, he taught them the principles of enlightenment. This helped them to attain enlightenment as well. His disciples came to be known as Sanghas or companions. This happened on Purnima (Full Moon) of Ashadha month. Thus, according to Buddhism, Guru Purnima is celebrated to commemorate Buddha’s teachings.

Soon, the Sanghas grew in number. They went to multiple directions of the world to propagate the teachings of enlightenment. Later on, this process came to be known as Buddhism.

Will Your Career Shine Bright In 2020? Career Horoscope 2020 Reveals It All!

Jains celebrate Guru Purnima as a special chapter contributed by Mahavira Tirthankara. According to Jain texts, Tirthankara Mahavira (24th) accepted his first disciple Indrabhuti Gautam. From then on, he came to be known as a Guru or a teacher. It falls on Chaumasa or the four month rainy season. This is the reason that the Jains celebrate Guru Purnima.

As the festival of Guru Purnima has more than one reason for celebrating it, rituals to celebrate the day may also differ. Let's take a look at how Guru Purnima in 2020 should be celebrated.

How Is Guru Purnima Celebrated?

Buddhist devotees follow the day of Guru Purnima through different ascetic practices. Under the guidance of a teacher, people also practice meditation on this day. This also marks the commencement of the rainy season. The Buddhist monks dedicate themselves completely to spiritual practices on Guru Purnima and remain in a fixed place in their temples. Many of them observe more orthodox practices by abandoning meat, alcohol, etc. This all are done according to the principle of Uposatha - eight rules of Buddhism.

Guru Purnima is considered as an important Thanksgiving day for the Hindus. Before proceeding forward, let’s know the rituals to celebrate Guru Purnima.

Vyasa Puja is the foremost pattern of celebrating Guru Purnima by the Hindus. Vyasa Puja takes place in various temples, which are decorated as symbols of festivity and traditions. A feast for the disciples is held. Following this, the Charanamrit (sweet curd with dry fruits used in religious rituals) is distributed among the disciples along with Prasada (holy food).

On this day, Guru Gita is read along with other recitations from Hindu scriptures. Padapuja is also held where slippers (Khadga) of the teacher are worshiped. It symbolizes to contain the feet-dust of the teachers obtained through thorough experiences in life. A special Mantra is chanted on Guru Purnima.

Guru is Brahma, also He is Vishnu, Lord Guru is Maheshwara too. Guru is the manifestation of that supreme cosmic power, I bow to the holy Guru.

2020 Horoscope Predictions Tells It All!

From hermitages to universities, teacher-disciple relationship might have traveled a long path, but this tradition has hardly changed. A student always expects the teacher to guide him to the right direction and help him achieve success. And with all his saintly qualities, a Guru always fulfills the expectations of the student. This is our turn to express our gratitude to our teachers or Gurus on Guru Purnima by wishing them Happy Guru Purnima and making them feel special.

Following are the food items that add more flavor to the festive happening of Guru Purnima.

After having a taste of the mouth watering dishes, one would surely need some sweet items on Guru Purnima. Let’s take a look at the sweet delicacies of Guru Purnima:

On Guru Purnima 2020, you can send Guru Purnima wishes to your Gurus. This will make them feel remembered on Guru Purnima. Students can also stage plays that relate with the significance of Guru-Shishya tradition.