IPL 7 is expected to take the IPL to new vertical heights. After six glamorous years of IPL, the IPL 2014 has been designed with better effectiveness and structure. 6,5,4...there’s minimal time for the IPL countdown, so better try and utilise the time. Hereby, we bring you the match predictions of the IPL matches. Try it and be the next cricket guru... 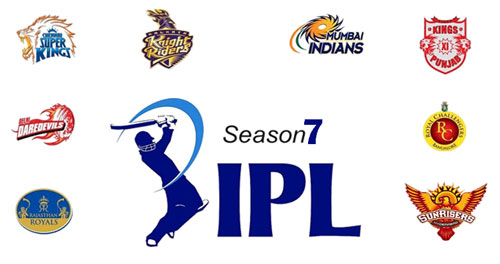 The clouds are still hovering over IPL 7, as the countdown is getting unreachable to the viewers. The IPL 2014 schedule has not yet been fixed and there are frequent debates over the venues of the matches. Amidst all the clouds and the possibility of rains, IPL 7 can never be mudded down. Therefore, we have come with some serious forecasts this time. Oh! No. It’s not a weather forecast. We bring you the match predictions of IPL 7 to be held this year. Click the button and be the self-proclaimed Sadhu of cricket…

The commencement of IPL 2014 is not far when the country has already started speculating about the winner of IPL 7, and we bring you the astrological predictions of the matches. No more use of vague speculations, when proper astrology is round the corner. Each match of the IPL will be crucial and if we know beforehand the winner through astrology, it might save our three nervous hours.

When we talk about IPL, it’s not just cricket, but something more to it. IPL is the phenomenal perception of the T20 era that began with the English County Championship. No one had ever guessed before the year 2008 of how cricket can bring the amalgamation of glamour and sportsmanship. But, this has happened! India is a nation where cricket is considered to be an obsession and BCCI has made good use of it.

This year, people are awaiting IPL 7 that is to be concluded with better expectations and slimmer competition between the teams. People gluing to television sets are going to be common in a few days. Bosses will find hard to keep their employees intact in the workspace. Students might dopple up their grades in exams. And alert for the traffic jams - roads will be packed up by cricket fanatics. Yes! It’s the IPL 7-the boon to T20 cricket that will be knocking on your doors. And astrology will let you know, which is the right knock at your door. Don’t spoil your precious time if you are planning to neglect serious plans this month, astrology is there by you. We are ready to predict the crucial matches.

We have no intention to be strangers to the first-time cricket watchers, seriously. Now, what’s IPL? Let’s take a nostalgic road to 2008.

How The IPL Emerged?

IPL was an initiative taken by the BCCI (Board for Control of Cricket in India) in the year 2008. The IPL 1 or IPL 2008 comprised eight teams - Kolkata Knight Riders, Delhi Daredevils, Rajasthan Royals, Chennai Super kings, Royal Challengers Bangalore, Mumbai Indians, Kings XI Punjab and Deccan Chargers. IPL 1 proved to be a huge hit as an extension of the T20 World Cup (played months before IPL). It was embraced with huge cheers and it was able to win over the hearts of the cricket lovers. So, this is IPL.

IPL 2014 will be the 7th IPL since 2008 and the countdown has already began. This year, the BCCI has designed the IPL 7 with better effectiveness that is expected to promote better match ethics. The eight teams that will be featured in IPL 2014 are: Chennai Super Kings, Delhi Daredevils, Kings XI Punjab, Kolkata Knight Riders, Mumbai Indians, Rajasthan Royals, Royal Challengers Bangalore and Sunrisers Hyderabad.

Auctions for IPL 2014 were held on 12th and 13th of February, 2014. The auction list came out of some surprising factors, rather unexpected. Two Indians topped the list for being the costliest players of the 2014 IPL season. They were, Yuvraj Singh and Dinesh Kartik, respectively. The origin of the players is something to cheer about. Yes! Both of them are Indians. Although, it seemed as if the current forms of both the players were kept aside. Yuvraj Singh bagged the offer of 14 crore rupees from Royal Challengers Bangalore, while Dinesh Karthik fetched an oversung 12.5 crore rupees from a wretched Delhi Daredevils. Other than the two Indian players, cricketers of the South African and Australian origin were also placed in the same list for IPL 7. Mitchell Johnson and David Warner got the price of their match winning performances against England in 2014. The increment in overall performances of emerging players in the recent past has led to more curiosity about IPL 7.

Cloud Of Curiosity Over IPL 7

Recently, IPL 2014 suffered a hapless strike when it was decided that IPL 7 would be taken out of India. Due to the general elections that is to be held in April, BCCI has hinted to take IPL 7 away to offshore venues such as UAE, Bangladesh or South Africa. Although the majority of the IPL 7 matches will be played in India, the locations are yet not confirmed.

When the IPL 6 of 2013 had already tolerated the suspense of match fixing and betting scam, the decision to move IPL 7 to UAE would not be very clever of the BCCI. UAE had been claimed as the land where match fixing initiated and letting the country to host IPL 7 would never be a good idea.

Although, BCCI has hinted that the country will be hosting 70-80 percent of IPL’s matches this year, such speculations are yet to be fixed out.

The most awaited thing in IPL 2014 is to feel the presence of the ultimate countdown before the tournament unfolds. When there is already a dramatic situation that is not cricketing in all aspects, BCCI need to take steps that would fix such hassles.

This time, the IPL is not awaited for the glitz and glamour it carries. People are curious to see the event unfolding, at least. 9, 8, 7, 6, 5, 4… somehow, it seems as if the countdown has stuck in its midway and the approaching days are seeming farther.